The dance that Mormonism had with Freemasonry 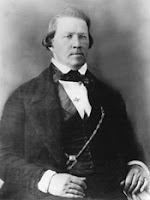 On John Ratcliff's blog, one of the commentors on a recent post of his made a speculative statement about Brigham Young (the second president of the Mormon church) which I found to be a rather unstudied and inaccurate statement.

In order to not hijack Brother Ratcliff's thread, I'd like to move this particular discussion over to this blog so that his thread can remain on-topic. Yes, this subject has been done over and over in many places. But here it is again.

First, I'd like to refer anyone to read The Mormon Church and Freemasonry by Terry Chateau. From my point of view, having experienced both groups thoroughly, and studied and poured over the history of both ad nauseum, I find Terry's treatment of the subject to be mostly accurate, however basic it is.

Next, I'd like to point out that this post is intended for Freemasons, which is why I posted it on my Masonic blog. I hope not to draw in a large Mormon crowd to this post. To those Mormons who do show up, and who aren't either Masons or true scholars of Masonic history, I would rather see you over at one of my other, religious themed, blogs. I don't mean any harm by this, but I'm just trying to keep the noise level down on this post except for those who have direct experience in the subject.

In spite of my experience level, at this point, my opinion is one desirous of historical accuracy and indifference on the subject.

Thanks for the book recommendation, I'll check it out. I have found it interesting that elements of Masonic ritual were borrowed for the Temple ceremony; at times word for word. I imagine that seeing our symbols during the Mormon ritual would create a lot of curiosity in Mormon followers who knew nothing about Freemasonry.

How does it make a Mormon feel to have the square and compass sewed into their holy undergarments?

If I had been raised Mormon I think it would have made me become terribly curious about the craft.

From my own point of view I just find it mildly distasteful that our ritual was copied so flagrantly.

My personal opinion is that the entire Mormon religion is a well crafted scam, and is entirely made up by certain individuals in history. But, that's just my own opinion and I know others do not share it.

I agree that the Chateau article is rather basic and perhaps superficial. Don't you think the discussions between Quinn and Homer, the Philalethes article by the undersigned, as well as Stapley's and Kimball's comments on oath bound organizations are the far more complete sources?

I would also note that from my experience as an officer in Lodges and Grand Lodges in both the US and UK, as well as attending a fair cross section of Lodges and Grand Lodges throughout English speaking Freemasonry (England, Scotland, New Jersey, BC, Oklahoma, Utah, MASS,the Rocky Mountain Masonic Conference, Shrine Imperial and the CGMNA in the last year), the LDS membership is still proportionately small.

Quinn and Philalethes are excellent sources. Of interest among Quinn's works, although only peripherally related to this topic, is "Mormonism and the Magic Worldview."

I don't consider Stapley and Kimball's statements to hold much weight on this matter. Yes, there is talk in Mormonism about oath-bound organizations, which sometimes get conflated with the idea of "secret combinations" that they like to speak of so much, but Masonry is usually admittedly the exception here, because of the historic level of Masonic membership among church leaders. At the same time, those who use such passages from the Book of Mormon to criticize hardly ever use it against anything but Masonry, but I've actually had my stake president contact the secretary to the First Presidency to help ease the mind of a petitioner whom someone tried to discourage! The response from their office was: There's absolutely nothing wrong with Masonry. Like all decisions, make sure you still have time for your other responsibilities as well. This comforted the new brother, and he is now an Entered Apprentice.

I think the LDS Masons who do exists right now probably, for the most part, haven't gone beyond Blue Lodge, are probably rightfully shy about expressing their religion in Lodge (which is why you haven't noticed them in Shrine and Grand Lodge meetings) are probably younger men, or recent converts to the LDS Church, who didn't grow up amidst that time of conflict. You're right, they're smaller, and I wouldn't expect them to have a large presence outside of the western US, neither within Utah. But I know they are there. And there are enough of us who are outspoken to reassure me that there are a few hidden in the woodworks as well.

Oh, yes, I realize they [LDS Masons] are there, and hadn't meant to indicate otherwise. I'm only talking comparative numbers. I'm approached at these meetings (including GL of NJ) quite regularly, by e-mail, and on a referral basis by the GL of Utah.

The majority of the US LDS Masons with whom I've become acquainted over the last 13 years are also in appendant bodies. It is less so in the UK and South America, given the nature of progression into appendant bodies there.

There are a number of LDS Masons who are members of GL in Utah, which I find encouraging given that the (Utah) prohibition ended only 24 years ago next month.

I do not generally consider Philalethes a good source, and was only arrogantly referring to the one article (G). I find Quinn's Mormon Heirarchy, Origins of Power, to be a useful if perhaps biased discussion. Homer points out other perceived issues. I like the Kimball/Stapley discussion because I think it de-emphasizes the secret combination issue which often dogs the discussion of LDS views of Freemasonry.

Your experience with referals to Church Headquarters are similar to mine. I have on more than one occasion suggested that when a local Church leader is said to have a concern with the Fraternity, that they be encouraged to consult with their next senior authority (I also wonder sometimes if there aren't other issues). This was the step taken by my Stake President when considering me for a Stake position (I think I was Potentate of the Shrine Temple for Utah at the time). It wasn't a problem then either (or it simply paled in relation to my other issues (G)). To my knowledge, this has been the consistent opinion of the LDS Church over the last years, other than the comment reported following which was not, in my view, completely neutral:

"There is no specific Mormon prohibition of Masonry, but church spokesman Don LeFevre said the church discourages it members from joining it or similar groups. 'The church strongly advises its members not to affiliate with organizations that are secret, oath-bound, or would cause them to lose interest in church activities.'" (Section D1, Monday Feb. 17, 1992). I am uncertain this is a correct date of the reported comment and according to an e-mail I have from a Church Public Affairs spokesperson, not the current view.

I agree that a number of the LDS Masons are younger (excepting some of us who regrettably no longer qualify). They are, however, moving into significant leadership positions in the fraternity.