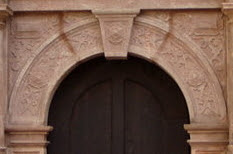 In the Mark Master Degree (the fourth step in Masonry, and the first of the degrees offered by the Royal Arch Chapter in York Rite) the allegory teaches about a Keystone which was found, whose purpose and design, while recognized as beautiful, were unknown to the overseers of the work, and caused it to be consequently thrown among the rubbish of the Temple.

I have been thinking about the character of the Overseers: They were either innocent, or perhaps ignorant. They were doing exactly what they had been told, and it was their chief duty to make sure that only work of the approved design (square) would be accepted. Metaphorically, this could be an important lesson if we ever find ourselves in the position of the Keystone. (In keeping with my last post, it seems that, as of late, I am taking non-human characters from the story and applying myself to them symbolically.) If we find ourselves to be thrown among the rubbish in a particular group or organization, instead of feeling negative towards the people who did the throwing out we should first determine whether or not they are following orders. If they are, be patient with them: They may come back to search for and reclaim you once they learn your true value.
Posted by Jeff at 1:30 AM

Sometimes the Grand Architect reveals himself in the most peculiar ways, and your post, for instance, appears to be one of those ways.

Recently - as in about 230 minutes ago - a colleague was given preferment over me, replacing me in a longstanding aspect of my job (sorry to be circumspect here, but you never know who reads these things).

I take your comments to heart. Thanks.