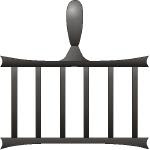 St. Lawrence, a Spaniard called to Rome by the Pope was martyred by order of the Roman Prefect, August 10, 258 C.E.

Fifty years later, Constantine had a Basilica built over St. Lawrence’s grave which became one of the seven major churches in Rome.

St. Lawrence was tortured to death by being slowly roasted on a grid-iron, but having confidence in his status before God, Lawrence responded by telling his torturers "This side's done," and, "turn me over and have a bite." ["Assum est, inquit, versa et manduca."] It is therefore said that he "bested the heat of the flames with the might of his spirit." 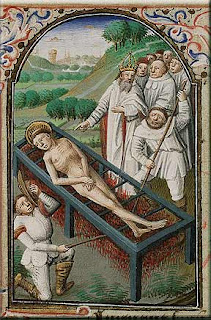 This degree requires the candidate to undergo a test of his own courage, after which he is obligated and taught the history of St. Lawrence and the significance of the symbols of this degree.
Posted by Jeff at 5:35 AM