This story of this Degree tells of the return from the Babylonian Captivity, and includes a historic variation of the ceremony of "Passing of the Veils" with which York Rite Masons are already familiar from the Royal Arch Degree.

The Veils referred to are a series of curtains which were, according to Masonic tradition, set up at the entrance to the Tabernacle during the rebuilding of the Temple. The first, or outermost veil is Blue, followed by Purple, Scarlet, and then White. 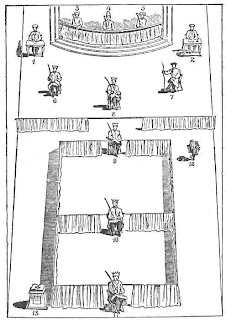 Thee Blue veil represents Universal Friendship and Benevolence, and is the principal color of Ancient Craft Masonry from whence the term "Blue Lodge" derives. The Purple is a symbol of union between Ancient Craft Masonry and the Royal Arch. Scarlet represents fervency and zeal, and is particularly characteristic of the Royal Arch Degree. White is a symbol of purity. Albert Mackey, in describing the veils, refers here to the scripture "Blessed are the pure in heart, for they shall see God." White is, therefore, the appropriate color to mark the candidate's admission into the place where he shall receive the long sought object of his journey.

In Ireland, the "Passing of the Veils" is worked in the Royal Arch Degree just as we do here in the USA, but in Bristol and Scotland a variation of this Excellent Master Degree is separately conferred upon Mark Masters in preparation for the Royal Arch Exaltation ceremony.

In England, and elsewhere, this portion of the Royal Arch ceremony has been reduced so that only the fourth, or white veil, remains.
Posted by Jeff at 10:13 PM

The Excellent Master degree, as practiced in England (in accordance with the Hale Chapter of Improvement #5141) is given to Mark Master Masons who have been granted the authority to preside over a lodge of Fellow Crafts. The ritual is given in a Chapter, and dove-tails into the Holy Royal Arch Degree, once the candidate has Passed the Veils.

Thanks for sharing.I found a lot of interesting information here. A really good post, very thankful and hopeful that you will write many more posts like this one.
https://vidmate.onl
https://anydesk.vip
https://tubemate.vip